Scientists around the globe are carrying out groundbreaking research to produce a safe and effective vaccine by next year — a great feat considering the process to develop and release a vaccine into the market can typically take a couple of years. With more than 165 vaccines being developed against the novel coronavirus, of which at least 31 are in human trials, we are still a while away from bringing the pandemic under control.

In previous articles, we have covered a number of the frontrunners, including:

The current post will introduce you to NVX-CoV2373, the vaccine under development by Novavax. This vaccine candidate relies on a protein subunit to establish immunity.

Read on to learn more about Novavax and the science behind this COVID-19 vaccine.

What is a Subunit Vaccine?

Simply put, a subunit vaccine uses a single component of a pathogen (that is, a bacterium or virus) to establish immunity. In other words, the vaccine is made from a single part of the pathogen — a subunit — rather than the whole pathogen itself.

In the image below, our hypothetical vaccine would be made from the subunit which corresponds to the head of the vaccine, for example. The “head” would be extracted from the virus to make a vaccine using that particular subunit.

Other common subunits used in the development of these types of vaccines include viral sugars.

An advantage to using subunit vaccines of any kind is that it is capable of eliciting a very robust immune response. The strong response is due to the fact that they contain crucial parts of the pathogen to which we build immunity.  However, in some cases, these vaccines could require booster shots to ensure ongoing immunity from the disease they protect against.

How Does Novavax’s COVID-19 Vaccine Work?

Novavax’s NVX-CoV2373 vaccine is no different from the other COVID-19 vaccines in development — it, too, exploits the viral spike protein. In the case of Novavax, the spike proteins are cultured in a laboratory using a complicated mechanism which is beyond the scope of this article due to its complexity, so we will not discuss it here. These spike proteins are then purified to remove all other molecules.

The purified spike proteins are then injected into our bodies.  Once introduced, they will be recognized as “invaders” and attacked and neutralized.  The introduction of spike proteins into our bodies teaches our immune cells how to attack the SARS-CoV-2 spike protein. When naturally exposed to the virus, our body will therefore have prepared its battleground and sent their best soldiers to conquer the SARS-CoV-2 virus as best as possible.  Next time the body has to deal with SARS-CoV-2, these trained soldiers will be at the ready to neutralize any virus as quickly as possible to help the body avoid a COVID-19 infection.

To produce the spike proteins, Novavax uses a unique mechanism.  This method has proven to work for the production of NanoFlu, which was fast-tracked for use against influenza. We will discuss this method using the following series of images.  These infographics endeavor to simplify and explain the methods behind the NovaVax  “protein factory” as best as possible.

Please note: The way in which Novavax’s vaccine is made is slightly more complicated than the other COVID-19 vaccines we have discussed so far.  The following schematic, which seeks to explain the foundational concepts used, is therefore simplified to aid understanding.

As can be seen from the image above, the SARS-CoV-2 virus takes the form of an RNA molecule, a single-stranded molecule of nucleic acids. The virus is genetically engineered and chemically converted to double stranded DNA so that it can be added to another virus to facilitate mass production of the spike proteins.

The DNA engineered from the SARS-CoV-2 virus is then added to a type of virus called a baculovirus, a virus which has unique properties that make it ideal for mass producing spike proteins for use in the Novavax COVID-19 vaccine.  Baculoviruses are a group of insect viruses that have a larger genome and can therefore accommodate additional “foreign” genes such as the SARS-CoV-2 virus.

To cause infection, baculoviruses must typically be ingested by the insect. When the insect eats the recombinant virus, it can gain entry into the insect’s cells.  Next, the recombinant virus we described above will take over the cellular machinery of the insect. The takeover means that the insect cells produce viruses and viral particles in bulk, which ramps up the production of the SARS-CoV-2 spike proteins that are expressed by the baculoviruses. The spike proteins can then be purified and used as a vaccine candidate.

Now that we know how the recombinant virus is made, let us look into some more detail on how Novavax manufactures NVX-CoV2373, their COVID-19 vaccine.

How is Novavax’s COVID-19 Vaccine Made?

As we have mentioned earlier, the baculoviruses must infect the insect cells so as to take over its machinery and mass produce the SARS-CoV-2 spike proteins.

For this process, Novavax uses the baculoviruses to cause infection in Sf9 insect cells. The Sf9 insect cells are a cell line that are established from the ovarian tissue of the Spodoptera frugiperda (fall armyworm moth).

Please see below for a step-by-step outline on Novavax’s manufacturing process, along with an illustration.

Please note: The following schematics aim to explain concepts of biology and are therefore simplified to aid understanding. 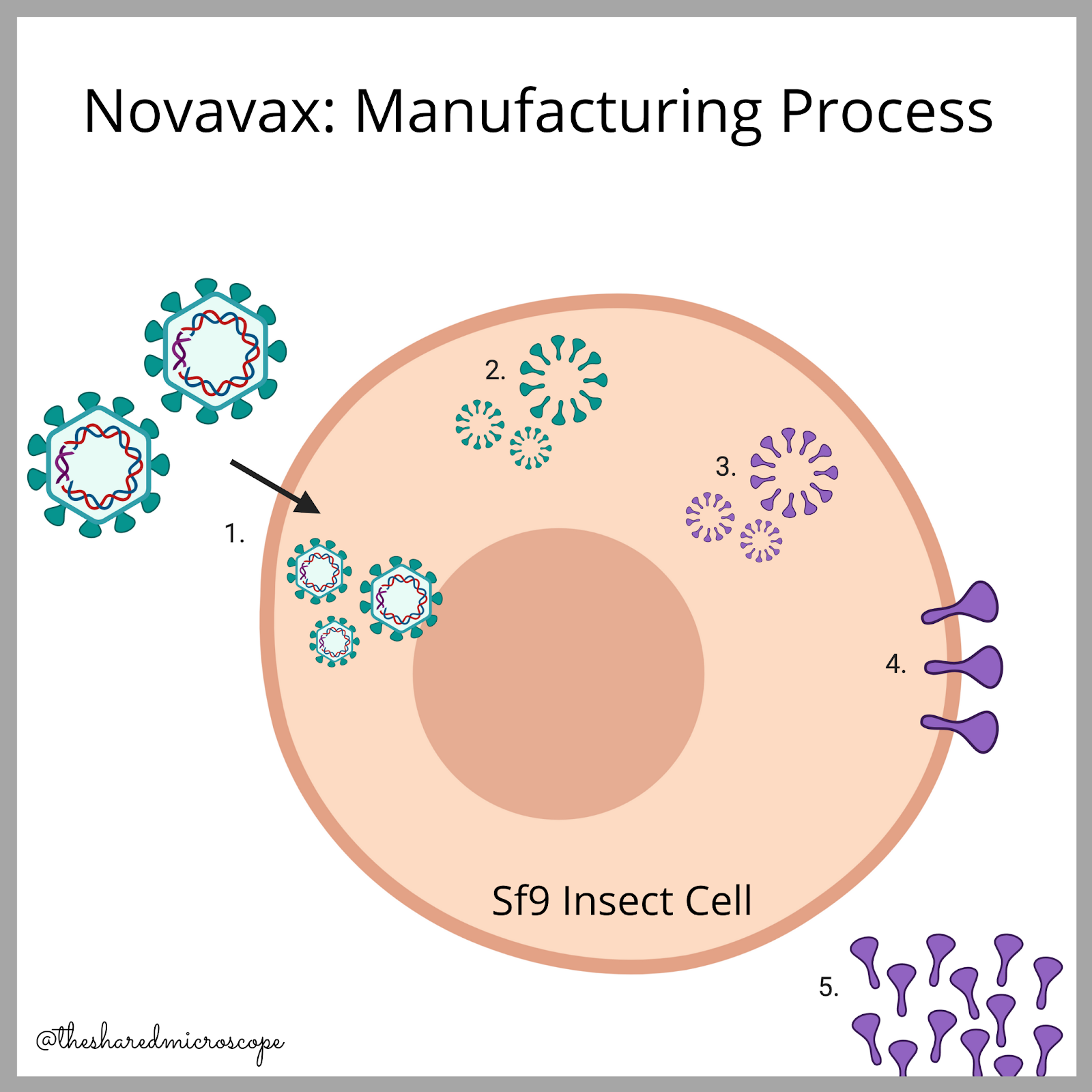 This illustration was created by Nidhi Parekh of The Shared Microscope using information from a published, peer-reviewed scientific paper and Biorender. The purple things are the spike proteins that undergo post translational modification

The extracted spike proteins are then inserted into “micelles” which are small artificial capsules the size of viruses. The micelles are then injected into our bodies. On injection, the micelles float freely in the human body. However, these micelles with the spike proteins do not get very far. Our immune system recognises them as “foreign” and presents them to key immune cells. This evokes the biological responses for immunity, and optimises our chances to fight off SARS-CoV-2 viruses before they can cause COVID-19.

The sf9 insect cell/baculovirus system has been widely used for the bulk production, isolation and purification of proteins. It was also used to develop vaccines against SARS-CoV which caused Middle East Respiratory Syndrome. This system was also utilised for the production of NanoFlu, a vaccine produced for older adults, which was fast-tracked for use against the seasonal influenza virus.

Although Novavax is far behind in the clinical trials compared to Moderna, Oxford/AstraZeneca and Sinovac, the vaccine shows a lot of promise. On May 25, 2020, Novavax announced that they were beginning their Phase I study of NVX-CoV2373 in Australia.

Novavax’s Phase I/II clinical trials included 130 participants with an age range of 18 to 59 years. The company is due to announce their preliminary immunogenicity and safety results for the vaccine in the first week of August. Phase II trials will begin following successful Phase I results.

Unlike the other COVID-19 vaccines in development, the NVX-CoV2373 vaccine is one of the few vaccine candidates that produces the viral spike proteins outside of the human body. The proteins are manufactured using the methods discussed above, purified, and then injected into our bodies. Other vaccine developers, such as Oxford/AstraZeneca and Moderna,  are using technologies in which the genetic information relating to the SARS-CoV-2 spike protein is injected into the body, for us to then produce the spike protein.

Novavax has received $1.6 billion in funding from Operation Warp Speed to develop and distribute 100 million vaccines as early as the end of this year. This money will be put towards completing late-stage clinical trials with up to 30,000 participants and also for the establishment of large-scale manufacturing for the vaccine. They are also to receive $388 million from the Coalition for Epidemic Preparedness (CEPI) to aid in development and manufacturing of the vaccine. However this is dependent on the results of the Phase I clinical trials. Will Novavax show positive Phase I results? Keep your eyes peeled on the news for the latest on this vaccine.

17 Replies to “How Does Novavax’s SARS-CoV-2 “Protein Factory” Work Against COVID-19?”